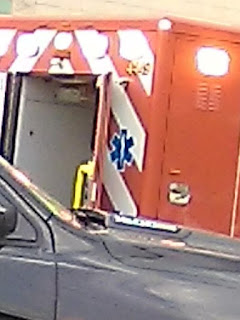 Another "safe & legal" late term abortion resulted in yet another butchered young woman . Just add her to the pile at "Hopeless". Midwest largest late term abortion mill.This time the ambulance came with sirens blaring. Normally they arrive quietly and pull into alley alongside abortion mill. This girl was in trouble. Granite City Fire and Rescue truck pulled up in front of mill and ran inside. This was day 2 of her late term abortion. She came Tuesday, late afternoon to begin the grisly procedure on her unborn baby. Oddly, she came in a U haul truck, with a young male driver. Arizona state plates. The male driver at one point yesterday 6-15-21 came out and began some small talk with our volunteer before he went back inside abortion mill. And they were one of the last clients to leaved the premises for the day. Both returned this morning ,Wednesday. Approximately 5 abortion clients today .All were from Tuesday indicating late term. As the morning ran into afternoon, a few clients still inside ; she was one of them. Two late terms left with soiled clothing in bags.The later the pregnancy the heavier the bleeding.Around 2:05 pm. the male driver of the U haul came running out and got into his truck . All the sudden loud ambulance sirens were heard and one pulled onto the front parking lot.  Both attendants jumped out and ran inside the front door gloved up.

A few minutes later they brought the lifeless looking girl on a stretcher out and placed her in back of ambulance. The male driver in U haul took off following them. Hope Clinic continues with the cover ups of their botched abortions and  gross negligence by  hauling butchered women over to St.Louis , Missouri, in particular, Barnes Jewish hospital where they have hospital privileges. Both abortionists Y.Shah and Erin King Eisenberg are on staff. Today's butcher was Erin King. Why just the other day we had an Australian film crew outside Hopeless  shoving their cameras in our faces and applauding the cutlery talents of the abortionists inside Hope Clinic for Women Ltd. This scenario, had it been caught by the film crew , would be on the cutting room floor . Most abortion mills fear ambulances showing up and lawsuits.

Besides, here in Illinois the revised RHA legislation, unfortunately, most abortion clients are unaware they have no protections or rights inside Illinois abortion mills. If complications occur during an abortion no one is held responsible. If a women dies during her abortion, the only phone call made is to the funeral home. No inquest. No coroner. No investigation. Why abortion mills are no longer required to be inspected.  You can thank JB Pritzker and Chicago Democrats for that. They could care less about the welfare and safety of a woman seeking an abortion. Its all about power, money and  politics. Back alley abortions have not ended; they just cost more. Period.

Posted by Small Victories at 8:18 PM