Hallelujah!   The best part was there was no 40 Days underway or Kathy Sparks Mosaic Cash Cow Van outside this abortion mill, as if.. But, there were the Lord’s angels and  men of God among us this day. 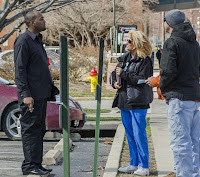 The Lord’s army showed up for battle this day as we have for decades on the frontlines of the abortion battle. An accomplice walked back out  towards the back of the building as we called over offering to save the baby and not be an accomplice to murder. He bolted towards Angela on the front walk and the two men of God joined her at her side. They were towering. He expressed his anger at our sight and words. “Is this your job?” He asked “Absolutely”, we replied, “The pay isn’t very much, but the rewards are worth it”, as we held the picture of our adopted babies up to him.  This was such a God thing, I mean Andy took over speaking with the man as God gently took me by the shoulder and walked me to the alley where I was able to talk to the girls as they were arriving.
Peace, for the first time in awhile, the Holy Spirit was on Andy and his friend who stood talking to the male accomplice.  The first save was a mother and daughter from Missouri, as they stood in line the girl was visibly upset; they didn’t think there would be people outside this slaughterhouse trying to intervene for their innocent child’s life.  They came back out only minutes later shaken and crying as we met them behind the abortion mill. They took our brochure and thanked us as they confirmed they were not going though with the scheduled abortion. 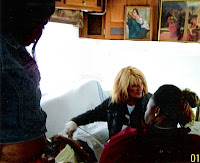 Three young girls began the walk into the abortion mill, Hope Clinic, and they turned to listen and one laughed at our pleas and offers of another way. But, a couple minutes later all five came back out! I’m serious. Two of the girls were pregnant. I met them on the front walk as a strange black man was running up to the prolifers on the sidewalk shoving a video phone in our faces. We just ignored him.  Remember, this is Planet Granite. But the Lord kept my focus on the women. I held my hand out to the girl holding her head down. I knew she was struggling. Come on in, and they did, commenting how nice our ultrasound van was and smelt good. :) We scanned the first girl, she was so quite. I asked, “Are you upset?” “No”, she shook her head. “I’m okay.” We then viewed an approx 13 week old baby girl. “What changed your mind”, Hazel, answered, “I felt bad as soon as I walked in, and then I saw you all, just couldn’t do it.” Thank you Jesus! We listened to heartbeats approx 160. Her friends were excited. We then scanned her other friend and she knew it was wrong, but she needed baby supplies and some assistance. “It’s a boy!” “Oh my look at his big head”, she commented. We laughed and went over resources and contact numbers. “You all are like angels”, Sondra commented. “Thank you for being here and helping us.” We handed them our last love bucket and some snacks.

We exited the van where other prayer warriors stood with much anticipation. The strange black man was gone. We then learned of another baby saved and confirmed: not a “turn away” which is a post abortion check up or an unconfirmed baby saved.

While we were doing the ultrasounds, we no sooner disinfected the ultrasound van, when Stan called to Angela that we had another save. BAM! Joseph and Lateisha came inside the ultrasound van. She was beautiful and Joseph reminded me of Samson in the recent Bible series on television.  We had spoken with them earlier when they first arrived. You could tell Joseph was pleading with the girl not to do it before they went inside the slaughterhouse. “Please help us, we are afraid, we didn’t know what to do”, Joseph said. “It’s okay, Let's see what’s going on.” We then scanned. I felt Joseph’s anticipation, there, an approx 4.5 week old baby, very early. “If you come back we can repeat the scan and you can visualize more.” We went over resources and physican followup. They inquired of our staff obstetricians .We gave them their information and they seemed a bit more relaxed. Actually holding hands and smiling. I handed Latesiah a small Bible for encouragement, as I felt she wasn’t really sold on keeping this baby and we prayed before they exited. As we came out, the group was smiling and we shared. I pointed to Joseph’s tag the abortion mill makes the accomplices wear identifying them as “driver”. I said, “You need to change that to read “HERO”.” They laughed and thanked us again and would be in touch.

Andy shared with us his conversation with the male accomplice and thanked me for the use of our son Isaac's picture. He pointed out the prenatal development sign we hold outside the slaughterhouse and he asked the man, “When is it a baby?”  He held our sons picture next to the 9 month gestation baby and said, “What is the difference between this picture and this baby?” Andy said, "Just one minute." WOW! The wisdom of Solomon. We were in the presence of God's chosen. The Lord was with us and we worked in unity and in love and gave them the truth.  This is how you stop abortion and save babies. March Madness began in gladness. Thank you Lord!

"And I will pray the Father, and He will give you another Helper, that He may abide with you forever"       John 14:16
Be encouraged,
~Angela
Posted by Small Victories at 5:54 PM