In today's intention: May we absorb the truth that GOD IS PAYING ATTENTION to us, and to each human life, individually and personally. Candy and her sister Tiffany pulled onto the adjacent parking lot to the abortion mill; deathscorts and Mary and the youth group followed. I urged Donna to join them. Then God said, 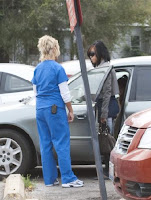 "It's okay; go on over." The deathscorts were at bay as God allowed a divine appointment with the facade of a hardened woman. Deathscorts tried to interrupt us, but we had protection. "Just give us ten minutes." Candy replied, "I'll have you know my mind's made up; I'm tough,.." but she agreed to come inside the ultrasound van. She had to walk through the groups of prayer warriors who were signaled to "pray harder" at the possibility that we may save a baby scheduled to die this day.
Once inside, she kept up the front of being a self-made woman, making it on her own, raising two daughters already, and no man in sight; the government is not the "daddy" as most are, plus she is holding down a job. "Let's see how far along you are." "I already know," she said as she lay prone, twelve weeks. We scanned. There, an approx 12.3 week old baby appeared with his hand up by his mouth. "We may have a thumbsucker." "Thumb-sucking is not allowed," she answered.

Donna talked about Jesus and His plan. Candy told her, "I believe in God, but science also." "I don't see any gills on this one," I replied. "Look! He is dancing." They focused on the screen. It seemed like we talked forever. At one point, Candy told us she was abused and victimized for most of her life. "I'm tired of struggling." "What doesn't kill you makes you stronger. It empowers you to be a strong woman. Nothing in life worth having comes easy," we told her. "You don't have to be a victim; you can be a victor, an overcomer."
She heard the heartbeats, 142 per minute; our guestimation was "a boy" but will be confirmed with her physician. We went over resources and mentors we could help with. "Just ask," we told her. She then began opening up a little and shared how she has no support, and never did, from her family and didn't depend on anyone. She doesn't trust anyone, especially after the abuse she and her daughters have been through with a former husband, which would explain why she doesn't like hugs. "It's okay Candy. I've been there; I know how it feels to survive that kind of abuse. That is why you don't like touching. I understand." We were exacerbated, running out of words. I asked her, "After seeing your little boy, are you still going to go in there and go through with his execution?" Her face was poker straight, and she asked, "Why do you say it that way?" "Because it's the truth of what the abortion mill is going to do to your child. He doesn't get a trial or jury; he won't get any pain medication, but you will." The van was quiet. When our words failed, "Let's pray," and we did.
I then looked up and said, "I've done all I can do inside here. What are we going to do?" She began sitting up, and for the first time I noticed tears in her eyes.Tears! They fell to her cheeks. She softly announced, "Well, I won't be going in there." I sat next to her as she wiped the tears, and I patted her leg, "It's okay." We took a few breaths. "I know you are not a huggy person, so I won't hug you, but could I please buy you breakfast?" We then exited the van. As I extended my hand out to her,and helped her down the steps, she grabbed it and asked my name again. "Angela," I answered. She replied, "Thank you Miss Angela. Yes, I will accept breakfast."

As we walked through the prayer warriors, I handed her some money to buy breakfast and explained where McDonald's was located. We made sure she and her sister got to their car unscathed; the deathscorts had gone by now and the troublemakers silenced their mouths from screaming. God was in control. I thanked her sister Tiffany for all of her help and support. "Call me, Candy. Be careful on your way back home." She smiled and got in the car. I returned to the sidewalk and felt a mountain lifted from our shoulders as they pulled off the lot. That was a hard one. We prayed again thanking God for allowing our hands to reveal the handiwork of God that lay nestled in this abortion-bound mother's womb. We also prayed for what appeared to be a hardened mother's heart, to be softened after listening to God's plan for her life and how much He loved her. Oh, how God cares for life and calls His people to to give of their time to appreciate, to care, to protect, and to love. Guide our hearts, Lord. In Jesus' Name we pray. ~Angela
Posted by Small Victories at 9:09 PM

Little children, let us love, not in word or speech, but in truth and action." 1 John 3:18 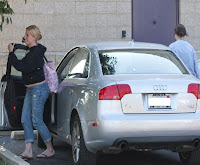 Thank you Jesus! It was midnight abortions; abortionist Erin King had arrived early. As the abortion-bound mothers walked quickly up to the purple doors, it was so obvious they were advanced in their pregnancies as their swollen bellies were hanging over the lip of their pants. We pleaded mercy and offered other options. Cars were driving by; many cursing us this day. We knew we were on target with the devil.
We had just confirmed our third save for the evening when the two college girls from St. Louis University came back out and looked over at us. God was answering prayers. We met them in the alley; the passenger was in tears as she told us her situation. We tried to soothe her and dry her tears as her friend  looked on. Her name was "Hannah." "That's our daughter's name!" We briefly shared her testimony; they smiled. "We would be willing to adopt another baby in order to help you out and save this precious one's life." She looked at me with tears and said, "I' m 30 weeks pregnant. I didn't know there would be anyone out here that would help us or that cared." "Did they show you your baby?" I asked. She handed me a paper. On it was the typical view mothers only get, that is the measurement of the crown  part of the baby's head, "So they know how long it will take to kill your baby and how much to charge. We could show you your baby if you like?" She looked at her friend, "We really don't have time. I just want to get out of this place." We handed her our brochure,  pointed out resources, and quickly prayed with her. She promised to call us.

As they drove off the lot, we gathered in prayer.We remembered today's 40 Days for Life intention: "May we have a heart and a zeal to save the poor and release the oppressed." Just then Andrea, a recovering addict we spoke to earlier, came out for a cigarette break. She had shared with me her plight. She was in rehab; this was baby number 4. She prayed to God to give her peace and to let this one in her womb come back to her another time as she was trying to get her life back on track. I pleaded with her and said that, "Our God is a loving God; a God of mercy and grace. But God hates the shedding of innocent blood. That baby is innocent. There are other options such as adoption." I shared about the post-abortive depression many women have gone through after their abortions, but Andrea was willing to take this risk. "I'm not here to judge you; that is up to God. But as His messenger, I'm offering you another way out, no matter the circumstances."
The abortion mill workers were eyeballing us and getting irritated. Finally, the guard came over and scolded Andrea that the staff has called her twice upstairs. 'There is still time to change your mind. God loves your baby, and He wants the best for both of you. Who knows what this child can grow up to be? He is full of endless possibilities. All he needs is a chance." She hugged me and whispered, "Thank you for caring. I will think about it and I will take your literature." With that, she walked back inside. 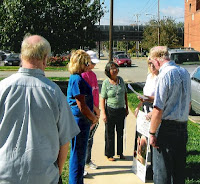 We prayed once more, "Lord, touch her heart. Let that innocent baby stir in her womb. In today's prayer You empower Your spirit to do Your will on earth. Send us the poorest, the most broken, the most captive, the most blind, and the most oppressed in the world: the innocent pre-born children in their mothers' wombs that are scheduled for destruction. Help us to bring them healing, liberty, sight, and justice through Jesus Christ our Lord, Amen."
Posted by Small Victories at 6:17 AM