Looking into the Faces of Evil...Sex Trafficing Alive and Well at Hope Clinic


"The sacrifice of the wicked is detestable-how much more so when brought with evil intent!"
Proverbs 21:27
Last night, at midnight abortions, was a hard one to swallow. It was a silent l-o-n-g ride home after fives hours of witnessing and saving babies in the gloomy, cold, rain. Almost every state in the union was arriving outside Hope Clinic the infamous Midwest largest late term baby slaughterhouse. Several of these abortion bound mothers spoke and confirmed their advanced pregnancies and the excuse to us throughout our soggy vigil.A girl from KY told us she was 20 wks pregnant with a baby girl, but the baby was bi-racial and her husband demanded she "get rid of it", We begged to adopt the baby. She thanked us but declined and went in eventually. The vulgar woman and her male accomplice from Indiana,called us a litany of the "C' word, the "B" word  was 24 weeks pregnant.   These mothers and their pimps/ accomplices callously told us to mind our business and it was their “choice”. Infanticide and human sex trafficking is alive and well in Granite City Illinois. 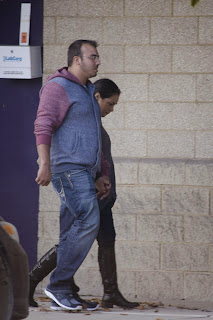 With the World Series underway this past week over the river in St. Louis, we have seen several pimps bringing girls to rid themselves of the evidence. We were accosted by one last week. He thought he was above the law to bring an underage girl for an abortion, which we have learned the recent implantation of parental notification law in Illinois, only means the girls parent (guardian) will be notified at some point, most likely after the abortion. It does not STOP the abortion. We confronted a male who brought a young girl from Ohio last week. She couldn’t speak English. He did all the talking, screaming at us it was a miscarriage. He kept giving excuses still calling it a miscarriage, as we tried to intervene for the young girl. Miscarriage, miscarriage. He went inside and a few minutes later the Granite City police showed up. Seems this hustler falsely accused us of attacking him. The new punk death-camp guard lied with him and told the officer that our sign dented a car. Another lie. 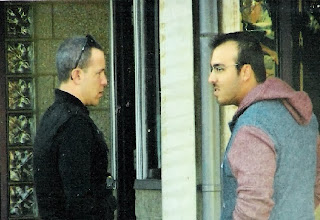 The hustler looked like a fool and we knew he
was a liar trying to cover his tracks. The Yale security rent -a-guard has no facts and no proof that our pro-life sign dented a car anywhere.  Today, cars were from NC, IN, KY(2), IA, MN, TX, FL,OH, MO(8), IL(4).  Wait a minute, OH? Yes, guess who we caught sneaking out the side door to go to his car parked on an adjacent parking lot? That’s right the hustler who screamed “miscarriage” at us last week and called the police. Not only was he a liar, but a murderer.  He took off, like a coward, after he got her back inside. Two week miscarriage, right? You see the evil we deal with everyday? This is our society. Depraved and full of murderers. Today was so upsetting, due to the fact that these clients were so evil, and vulgar. Just like the adulteress when confronted in her sin, she wiped her mouth and said, I’ve done nothing wrong” Proverbs 30:20. This was today outside the abortion mill in Granite City. Evil. Abortionist Dr.Erin King arrived and we stood  two feet from her as she smiled and  gloated when confronted with what she was about to do to at least 26 late term baby girls and boys. She’s done nothing wrong…this is what they asked for.

This past week over the river, St. Louis, Missouri and Busch Stadium hosted the World Series with over 47,000 fans in attendance. Last night, we had three more people stand with us during our vigil trying to bring some dignity to the least of these and to be a voice for those being led to their slaughter. Proverbs 24:11-12. And most importantly, to let those little boys and girls know that they did not die, alone, we were there. I ask you, where are the Men of God ?
Posted by Small Victories at 8:51 AM

Twins saved outside Granite City Abortion Mill this past Saturday. Jessica holding ultrasound picture, chose to save her 8 wk. old twins after viewing them. PTL! How many more can we save? Thank you Lord! We've saved more babies on accident than other organizations that claim to have done, on purpose. That's the Lord's grace and mercy. When you're faithful in the little things, God will bless you with big things and He will bring you through to the fullness of your destiny. 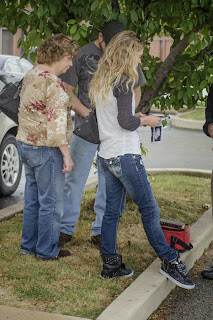