28 MINUTES..
22 yr. old lays dead inside Preterm abortion mill
Forward by Angela Michael
March 26, 2014
Another Black woman dies at the hands of those who profess to protect women and ensure their rights to, so called, safe “healthcare,” otherwise known as ABORTION. Not surprisingly, I missed the coverage on the evening news because, as a matter of fact, there is a blackout when it comes to women dying in the back room of an abortion mill. I ask you, where is the outcry?  Where are the investigators?  Where is the NAACP?  Where are our legislators?  Where is Al Sharpton?  Jesse Jackson?  Oprah Winfrey?  Wendy Williams? Barack Obama? Michelle Obama? Where is BET TV? Look at the stats of black women's deaths by legal abortion; it's stunning! Yet the silence coming from the church, the community, the media, is deafening.  For 28 minutes this 22-year-old young woman lay dead on a table of the slaughterhouse, a human slaughterhouse, in .
Listen, “back alley abortions” have not ended, they just cost more. And Pro aborts call this healthcare?
How many more women have to die by legal abortion in order to get the attention of this nation and society as a whole?  Are women not worthy of our protection to at least have safe standard practices enforced inside these “meat markets”?  Everyone in the medical world knows that “abortionist’s” are considered “dirty doc’s," “bottom feeders," that can’t run a legitimate practice; often incompetent and motivated by greed.   As a result there are hundreds of documented women who have died by legal abortion. Unfortunately, these are only the reported deaths; there are far too many that go unreported or classified as a “maternal death” on the legal death certificate. (http://www.lifedynamics.com/Pro-life_Group/Pro-choice_Women)                                                   #Tonya Reeves vs Trayvon Martin
ABORTION: “Safe & Legal: That’s a Lie. Women shouldn't have to DIE."~A.M.
Please read on and view video

Woman dies after abortion: 911 records show woman was ‘not breathing at all’

BY OPERATION RESCUE STAFF
, , March 26, 2014 (OperationRescue.org) - Operation Rescue has obtained a 911 recording and Computer Aided Dispatch transcript that indicates a patient of Preterm, a , abortion clinic, has died.
Records, which were obtained through a public records request, show that at 10:59 a.m. on Friday, March 21, 2014, an employee of Preterm dialed 911 and reported to a dispatcher there was a 22-year-old female patient at the clinic who was not breathing at all.
The caller also indicated that the patient was unconscious and receiving CPR at the time of the call, but efforts to restart respiration had been unsuccessful.


“The lack of a sense of urgency really struck me as I was listening to the 911 recording,” said Troy Newman, President of Operation 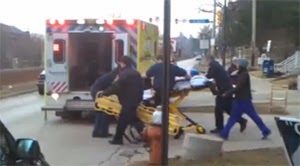 Rescue. “A woman was dying or dead, and there just seemed to be no real hurry to respond to the dispatcher.”
The CAD transcript, which lists event chronology for 911 emergencies, showed that units were dispatched just moments after the 911 call began and that it took paramedics three minutes to arrive at the clinic at 11:02 a.m. when they began emergency measures.
At 11:21, paramedics transmitted information about the patient’s condition to the and began to transport her to the emergency room, arriving at 11:26 a.m. The ambulance listed its status as “cleared” at 11:27 a.m.
At no time during the 28 minutes that emergency responders were in contact with the patient was there any indication that the patient ever resumed respiration.

The CAD Transcript contained the “9-E-1,” the most serious of life-threatening medical emergencies, along with the notations “Cardiac or Respiratory Arrest/Death” and “Not breathing at all.” 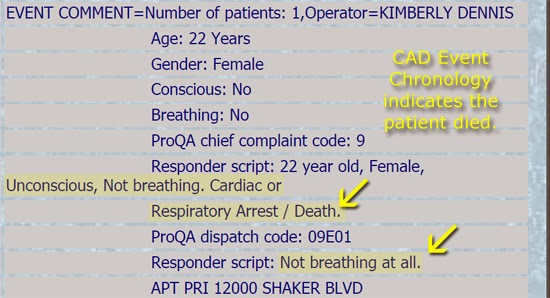 Pastor Dale Henkel was on the scene and took video and photos of the incident, which have been released by Operation Rescue in a video that also features the 911 audio. He told Operation Rescue that the patient was African-American, as are about 80 percent of the high-volume clinic’s abortion business.
The video clip showed that emergency workers were not performing any kind of treatment on the woman as she was wheeled on a gurney to the awaiting ambulance. There appeared to be a small towel over the woman’s face.

As a matter of practice, paramedics or EMTs do not pronounce death at the scene, but instead transport the victim to the hospital where a physician can pronounce a time of death.
Pastor Henkel told Operation Rescue that after the ambulance left the Preterm abortion clinic, it was followed by a woman thought to be a nurse wearing blue surgical scrubs, the office manager, and a man believed to be abortionist Mohammad Rezaee.
Last year, an woman sued Rezaee for malpractice after an abortion done by him failed and she later birthed a healthy “miracle baby.”

This is not the first abortion complication recorded at Preterm. On April 13, 2013, activists photographed clinic escorts loading an injured abortion patient into a private vehicle for transport to an unknown location.
“It’s ironic that the abortion cartel has complained so loudly about the new abortion clinic standards in . Based on Friday’s incident, it appears that the regulations aren’t strict enough,” said Newman.
“If it had not been for alert pro-life activists, this tragedy surely would have been swept under the rug. But now, we plan to submit complaints in order to hold the Preterm abortion clinic and staff accountable so this doesn’t happen to another woman.”

Posted by Small Victories at 11:07 AM