History is repeating itself. Just as one hundred and fifty years ago our nation was torn apart over the issue of slavery, even so, today there is another great evil that divides the country…abortion. Back then, a whole race of Americans was viewed as inferior, less than human, chattel to be used at another’s whim and will; even so today, there is a group of Americans who are shamelessly treated as “things” to be owned, to be disposed of…unborn children.

The parallels continue: Back then, by a majority decision of 7-2 in the infamous Dred Scott case (which had it’s beginnings in St. Louis), the Supreme Court ruled against all those of African descent; even so, in 1973, by a majority of 7-2, the Supreme Court overturned the pro-life laws of all fifty states and declared that the humans in the womb were no better than slaves, living and dying at the discretion of another. Back then the compassionless cliché was, “Don’t want a slave? Don’t own one.”  Today we say, “Don’t like abortion? Don’t have one.”
Sadly, it took a Civil War to bring the horrid institution of slavery to an end; a war fueled by the preaching of righteousness and the dissemination of the truth that “all” men are truly created equal. And today, another war is brewing and has begun as we and many stand in the gap, being witnesses of the atrocities, and proclaiming on the airwaves the reality of these horrid acts; and very soon we will have the opportunity to bring this message, this truth, into the living rooms of many.

This month is the 56th anniversary of a brutal, unthinkable act. Emmett Till was a young African-American boy from who was violently murdered in while on vacation. His funeral service was to be closed casket because his face was so disfigured, but his mother insisted the casket be opened so that the world could see what had happened to her son.
Over four days, thousands of people saw Emmett’s body. Many more African-Americans across the country, who might not have otherwise heard of the case, were shocked by the pictures of him. These pictures moved them in a way like nothing else had. Black preachers were demanding that “something be done in now!”

Showing what’s in the casket is exactly what we do outside these abortion mills…and we are hated for it. Our message: If the truth of what happens to a person through abortion is so horrible, then why are we allowing it to happen?
At first, local whites as well as blacks were horrified by the crime. Newspapers and white officials reported that all “decent” people were disgusted with the murder and proclaimed that “justice would be done”. That same attitude from our leaders and churches needs to be embodied now. It needs to be preached from the pulpits and driven into the streets where battles are won. We have no more excuse for calling unborn children “non-human” today than our forefathers did for calling blacks “non-human” then.
Elie Wiesel, survivor of the holocaust, wrote: “What harms the victim most is not the cruelty of the oppressor, but the silence of the bystander.”
In Emmett Till‘s mother, Mamie Bradley‘s words: “Two months ago I had a nice apartment in Chicago.  I had a good job. I had a son. When something happened to the Negroes in the South, I said, ‘That’s their business, not mine.’ Now I know how wrong I was. The murder of my son has shown me that what happens to any of us, anywhere in the world, had better be the business of us all.” 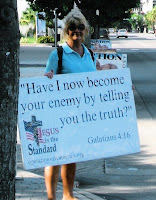 We can no longer stand by and say, “It’s not our problem.” I ask you; are we not our brother’s keeper?  If the horrible “seen” injustice done to Emmett Till moved a nation to action, should not the unspeakable violence done to the most vulnerable Americans--the children in the womb--move “us” to action?
“There must be a crisis of the conscience. Only after seeing abortion for what it really is will we understand the controversy and end this horrible injustice. We must never, never be silent on atrocities that we find disgusting to view.”
Posted by Small Victories at 5:24 AM